The Set is Complete 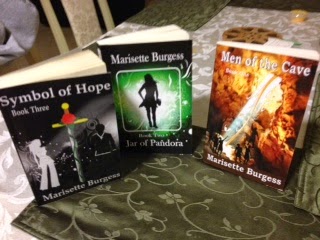 The proof is in! Book Three available soon in print. 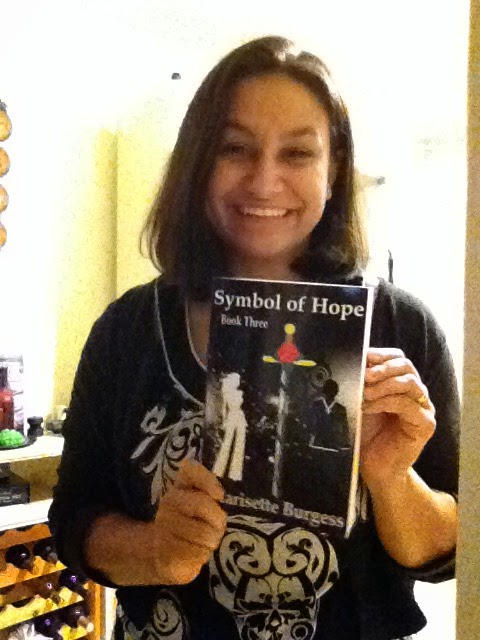 Posted by Marisette at 10:12 PM No comments:

Goals for the New Year

I am so sorry I have been MIA this past year. I'm in a new position and it has taken up tons of my time. So I set myself a goal to get another book finished this year. Fingers crossed that it happens!

Here is what's going on with the Symbol of Hope series:
FINALLY its coming to PRINT!!! Sorry it took so long. I just sent off for the proof, hopefully all is well and the third book will be available to purchase as a paperback soon.
Once it's ready to be released I will be running a giveaway contest on Goodreads as well as other possible tours. I will also have a limited time coupon code to use on Amazon.
(The e-book will be temporarily unavailable as it is getting reformatted.)

As for the other two books they are still available on Amazon in print and e-book. Keep an eye out for the box set this year.

Here's what's NEW!
A sneak peek at my latest...A YA dark fairytale.


By the riverbank, she washed her clothes, wringing them out into a basket. Prince Eamon stopped his horse as he spotted her. She was young, his age or less. Her beauty, even from across the river, was nonparallel to any he had seen before. Like a silent dream she knelt by the water’s edge. Her fair skin, contrasted the dark brown of her long braided hair. Her eyes were deep and foreign.


“Who is she?” Prince Eamon asked.


“I do not know. I do not recall ever seeing her. If she is not spoken for, then she ought to be at the palace. My men swept Lexington; no eligible maiden remained unaccounted for,” Sheriff Waldron said looking intently at the young girl.


“We are far into the country. Could they have missed a lonely poor man’s cottage out here?” the Prince asked with a hope that his soldiers did not venture to this girl’s home.


“That is possible, do you wish to inquire sire?” The sheriff asked.


The three men turned their horses toward the shallow river. When the horses pattered into the water, it was then that the young woman took notice of her company.


“A moment of your time girl,” Luscious called out to her.


Her dark eyes huge with worry, she gathered her items with haste. Then the girl ran into the woods.


“Stop! In the name of King Norbert!” Sheriff Waldron yelled. He slapped the reins to his white mare and galloped across the river with speed. The other two followed in pursuit.


The maiden kept her speed, never stopping or looking back. Her small stoned cottage not too far, she knew she could reach it and prayed they would not follow her there. Fearing the basket slowed her down she dropped it and continued. As she approached her wooden door she slammed it shut behind her. With heavy breaths, she ran and hid behind the curtain to her pantry closet. Crouching down underneath the lowest shelf, she brought her knees close into her chest. Terrified she attempted to control her breathing.


The men saw her run into the cottage. They dismounted their horses and tied the reigns to her fence. They approached her door. The Sheriff pounded angry, “Open at once, in the name of the King!”


No answer or movement came from inside the cottage.


“Young lady we will break this door down unless you open at once!” the sheriff yelled.


“Can I help you men?” A male’s voice came from outside the girl’s fence.


The three men turned and met the curious gaze of an old man with a bow pointed at them.


The sheriff flashed the badge on his chest, “I am the Sheriff Waldron of Lexington, and I should lock you up for pointing your arrow at Prince Eamon,” he gestured to the prince.


The old man’s eyes went wide. He retrieved his weapon and took to one knee at once.


“Forgive me your majesty, I did not know.”


“Do you own this cottage?” the Prince asked stepping forward.


“No sire. My wife and I along with my children live down the river. It was she who saw you chasing the girl who lives here and I came to see if she needed my help.”


“What do you know of the girl who lives here?” the Prince urged.


“She is a peculiar girl. She lives alone; we believe her parents must have passed some time ago. She will not allow anyone near. She runs from all. My wife brings her bread and pies in a basket but leaves it at her front door. If I may sire, what has she done?” The old man raised his head and stared at the young prince.


“She is in contempt of the law. Every eligible maiden had to report to the palace three days ago,” Sheriff Waldron proclaimed.


The old man rose, “I doubt she even knew. The girl never leaves the cottage unless it is to go to the river or into the woods to check her traps.”


The Prince walked over to the man took his hand and shook it.


“Thank you for your time,” the prince said.


The old man’s forehead wrinkled, he nodded with uncertainty. His eyes glanced nervously toward the girl’s door then back to the prince.


“We do not intend to hurt her. I promise,” Prince Eamon said.


“Good day sire,” the old man bowed and left back into the woods.


The Prince turned back to his men, “Tear down the door.”
Posted by Marisette at 9:01 AM No comments:

Marisette Burgess Author of- Men of the Cave

Promote Your Page Too

Now available as an e-book

Men of the Cave